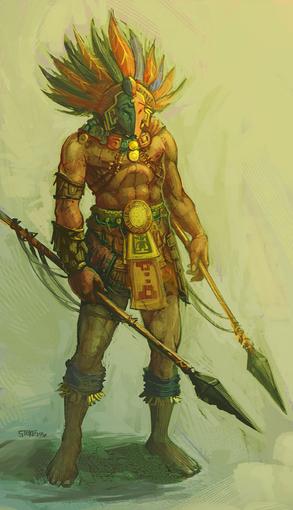 The Olman natives have suffered from the depredations of predators both natural and natural since the fall of their empire. For generations, the few scattered tribes have survived on the verge of extinction. They learned that high walls and organized defenses could fend off the dangers of the jungle, but another kind of weapon was needed to fend off the dangers of the Abyss. Much like Sarkor, the low mountains and jungles of the Varisia frontier were the home to many rifts between the Material Plane and the Abyss.

When demons began filtering through these portals after the Worldwound opened, the elders knew that they must revive the old ways. Their tribes united to prevent their total extinction and vowed to use their unique skills to prevent the word from being taken over by the abyssal out pouring. To this calling arose the totemic demonslayers, a small order of natives who have developed tools for defeating demons.

Developed to combat the threat posed by the unnatural incursions of fiends, totemic demonslayers are wilderness warriors skilled at facing otherworldly foes. Using their affinity with the natural world and the strength in their belief in ancestral totems, these demonslayers gain special adaptations and powers useful in combating such horrors.

Becoming a totemic demonslayer is not limited to Olmans, but it is difficult for others to do so, as it requires the special blessings and rituals of an Olman holy man who follows their traditional deities and an Olman shaman trained in the practice of Oteotlatoque. Only when such a ritual is completed can the demonslayer begin collecting the totemic tattoos and utilizing the abilities of their tribe.