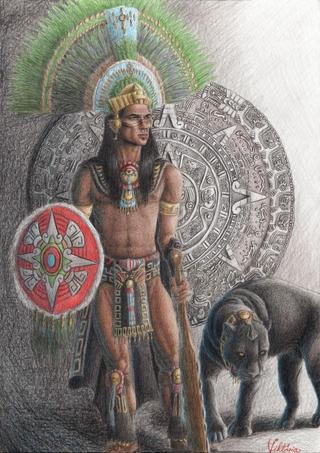 The Olmans are an ethnicity of humans with their own unique culture and values. While the Olmans may appear primitive to some at first glance, they are very skilled warriors, artists, and have built some of the largest and most advanced civilizations. They are primarily a tribal people, though in the past they commanded a great empire that spread across what is now known as Varisia.

The Olmans have a long, rich history that covers thousands of years. The Olmans have seen the rise and fall of several great empires in their history, and while they have fallen far from position of greatness, they remain proud.

Olman tend to have reddish-brown or dark brown skin tones, and speak their own language. They worship a pantheon of gods: Camazotz, Chitza-Atlan, Coatlicue, Huhueteotl, Hurakan, Mictlantecuhtli, Quetzalcoatl, Tezcatlipoca, Tlaloc, Tlazoteotl, and Tonatiuh.

The Olman have also been known to worship non-divine beings such as Xilonen and Xuxeteanlahucuxolazapaminaco as if they were true gods. A gas spore and a giant snail seem to have also played a part in their mythology. The Hidden Shrine of Tamoachan mentions, but does not name, other entities revered as gods by the Olman: a coyote (Huehuecoyotl), a crab-headed god (Kalka-Kylla), an alligator-headed god (Huhueteotl), a feathered warrior (Huitzilopochtli), a jaguar (Tezcatlipoca), a sun god (Tonatiuh), and a “dual-god, the supreme god, the god of creation” Ometeotl.

As the once secluded civilizations of the Olman expanded, they came to know Iomedae, Sarenrae, Shelyn, Desna, and Irori. They worship them as gods alongside their Pantheon, reguarding their pantheon as “the ancients” and the others as the “worldly gods”. In a pantheon, there’s always room for more it seems.