The city of Kenabres overlooks the Worldwound from its perch on the eastern bluffs above the West Sellen river. It’s the gathering place for crusaders headed into the Worldwound, and home to a resolute—if occasionally overzealous—group of defenders. Kenabres sits within the nation of Mendev, near the Estrovian Forest to the south, the Lake of Mists and Veils to the east. 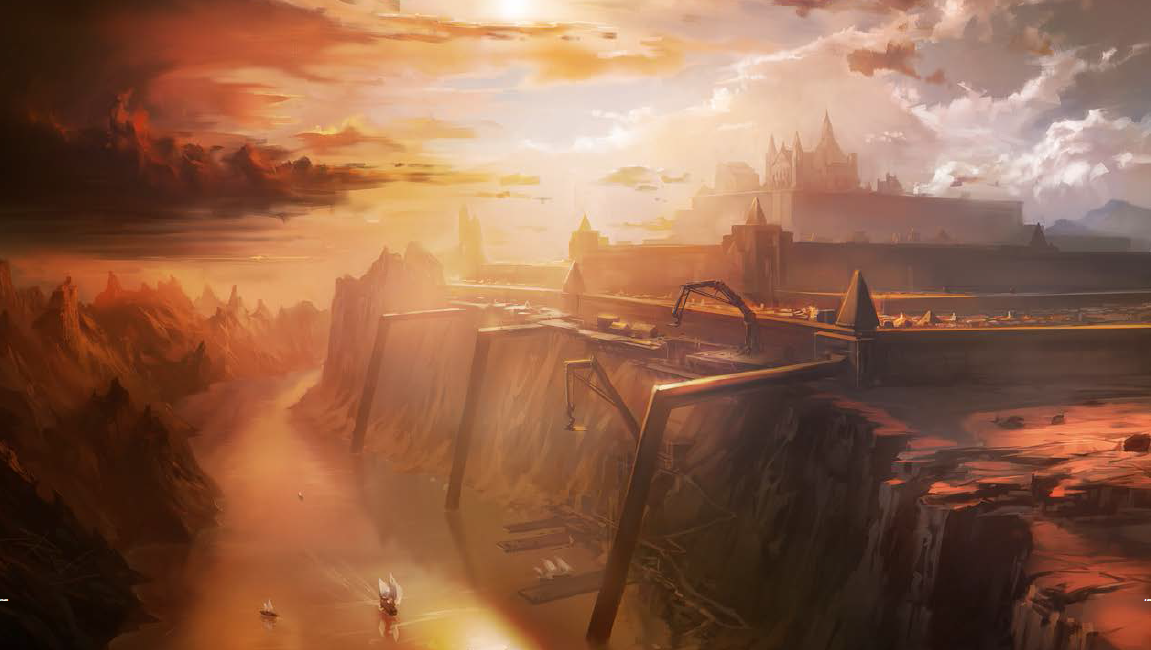 Kenabres sprawls across a series of graduated tiers that rise from the plains in the east to a cliff ’s edge in the west. At the base of the cliff, the West Sellen River roars past. The central and westernmost districts of Kenabres are the oldest, and those radiating out and to the east are the newest, built only in the last hundred years.

Before the Worldwound opened, spilling demonic hordes into doomed Sarkor, Kenabres was a small and industrious town on the border. The people of Kenabres traded up and down the river, and they drew their water from it via a cunning system of pumps and pipes. After the coming of the Worldwound, the town was overrun with refuges. The citizens of Kenabres at first took them in graciously. This initial hospitality was after the the Red Morning Massacre, and subsequent immigrants were subjected to close scrutiny and were forced to undergo invasive tests to prove their humanity. Despite the growing difficulty of being accepted into Kenabres, refugees continued to pour in from Sarkor.

A century after the opening of the Worldwound, the town has grown into a small city. A series of walls were erected as Kenabres grew, creating several physically separate districts. Today, the more than 12,000 inhabitants live almost entirely within the fortifications, while gathering crusaders make camp outside the walls to the north of the city. The pipes that draw water from the West Sellen River have become fortifications unto themselves, being built primarily with thousands of pounds of stones transported from Truestone Quarry under the vision of the architect Sibella Morond.

After the Second Mendevian Crusade the leaders of Kenabres agreed to house one of the procured Wardstones within the city, building a stone keep, The Kite, to house it. Between the Wardstone and the fortifications, Kenabres has been a relatively secure stronghold against the demonic hordes that continually threaten the city and the rest of Golarion from just across the West Sellen River.

The city was attacked by demons in 4713AR in an event known as Black Armasse, a brutal strike against the Wardstone of Kenabres by the balor Khorramzadeh, the storm King of Iz.