Selma is a short Sarkorite girl at 5’1", and though she is 17, most people mistake her for a child. Her actions do not help this much, as her isolated farm upbringing in a far off land has left her with almost no understanding of what those around her find commonplace.

Her demeanor can be… odd, and she is bad at talking, but tries her best. Actually… she tries too much. Selma, you can stop now- S- Selma…
It’s actually rather easy to forget amongst her young appearance and extreme and often friendly naivety about almost everything, that Selma is incredibly smart, creative, agile, and dangerous. She’d gotten the short stick in life even before her family was skinned alive, being raised on a beet farm and being isolated further by her ethnicity. But when she was forced to survive and learn her heritage, she began training with Red Dawn Summoning, a Sarkorite militaristic form of summoning, that before their fall made them one of the most dangerous nations on Avistan.

She can also carry little more than her own body weight, never takes off anything for fear of losing it, and is not nearly so good with people or expressing her ideas as she tries to be. It is the most awkward sort of endearment.

Selma is the descendant of Sarkorite refugees, and so is dark skinned, with white hair and green eyes. She wears a green cloak marked with the symbol of a rising sun, and a mask with the word “Light” writen in Sarkorite where her mouth would be. She carries a large wood and string circle like a dream catcher, that she uses in her maccabean summoning. Until recently, she traveled with a summoned golem powered by her brothers soul, an oddly shaped companion called Bernard, who was always cloaked and did not speak. After her magics were interfered with by a demon she and Chiemeka managed to kill in disrupting its ritual, she has been unable to bring him to her side, and has spent most of her waking hours trying to get him back.

Selma is obsessed with her history, though she has had a rather difficult time learning it, and the more she has learned, the more she has felt the need to become something better than her past. This has led her to very poorly attempt keeping secrets, and take on the mantle of Dawn Walker, hiding her face behind a mask.

Selma’s family began to beet farm outside of Tristram in Khanduras, nearly a century ago when her grandmother was a little girl, and escaped the opening of the Worldwound in Sarkor. She and her brother were thus born into a land where they were outsiders, and most wealthier Sarkorite families in the area had been lynched as scapegoats years ago. This she experienced during the most recent plauge to ravage Khanduras, when her father barely escaped from a violent mob when going into town. He and Selma’s mother soon fell ill with the plauge themselves, and when the plauge carts came to collect them and burn their farm, Selma and her brother Bernard tried to stop them, but they failed, and Bernard was mortally wounded. Selma, using hidden treasures from the old country, tried to save Bernard with Sarkorite magic. Unfortunately, Selma did not understand the purpose of the ritual she was performing, and unintentionally bound her brother’s soul to her as an Eidolon golem.

She found herself darting through Kaduras with what she came to realize was not quite Bernard anymore, in search of ways to save her parents. She learnt the tragic past of her people as they fled the Worldwound, and began uncovering parts of the fall of Sarkor. Meeting the Wizard Merlin, who told her she was one of the Seven, she was able to learn more of the summoning she inherited from her grandmother and of The Red Dawn. Merlin directed her to seek Mim, who herself had been a member before long ago abandoning that path. With the knowlage she gained from both of them, and the help of the paladin Chiemeka des Chapeaux, she was able to get to where her parents were held and they stopped the Demon that was plaguing Khanduras. However, her parents were already dead and skinned alive, and the Demon did something that blocked her ability to summon Bernard.

On their way to the crusader city of Kenabres, Selma became sicker and sicker as she spent every waking hour either trying to find a way to get Bernard back, or making really good decisions with her money. 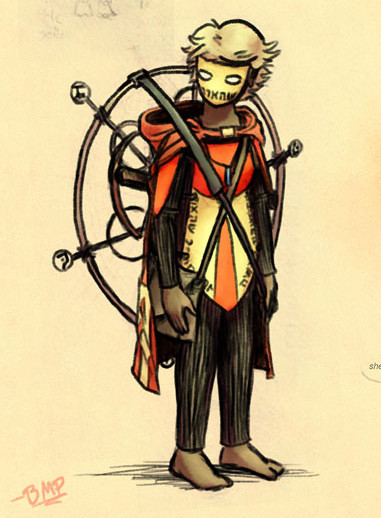