Rex’s story starts even before he was born. His father, R. Pennington II, an adventurous and curious man, decided to see what was beyond Corgyn ’Bre — something not many Corgyn do because conditions outside of the pack lands are really rough on the fur. He was gone for a few years, and many thought he was dead. He came back, but it was apparent that something changed in him. He challenged the reigning alpha, Windjammer McHenry XV, and won. Challenging the McHenry family as alpha was unheard of before then, as they were direct descendants of the heroic Windjammer the Silent — who appeared from another plane entirely.

Windjammer McHenry XV disappeared shortly after his defeat — it is not known whether he was exiled or if he left of his own free will, but his wife Stella McHenry (nee Stumphrey) married R. Pennington II (of her own free will, or so it appeared). Stella soon after became pregnant with a litter of pups, but all of them were documented as stillborn, with the exception of one male pup. That puppy was given the name Reginald Aloysius Pennington III, but was lovingly referred to as “Rex” by his half siblings and mother.

Rex and his father are regarded with fear more than respect. There are whispers around town that perhaps Rex’s father was possessed by some sort of evil, and perhaps this was passed down because Rex had fits of rage constantly. Rex grew up around the speculation, and most of his half-siblings treated him with resent — with the exception of his oldest brother Windjammer XVI (gosh, why can’t Corgyn have more creative names??). Windjammer was always a bit optimistic and unsuspicious, and showed an unnatural amount of unconditional love for his hot-tempered baby brother.

Rex heard stories about the good deeds of the McHenry clan, and noticed his father was falling short. His dad would often exile members of the pack council if they disagreed with him, and didn’t seem to care for the well-being of the pack. He was mainly concerned with power. Even Stella was acting a bit strange.

One day, Rex got in a fight with his father. Rex was enraged, and did a bunch of damage to his immediate surroundings, but somehow managed to not even touch his father. His father held an emergency pack council meeting, and it was “unanimously” decided that Rex should be exiled.

Since then, he’s wandered to Kenabres, wishing to find answers as to what happened to his father. He also hopes to help the McHenry clan gain back their alpha family status…and maybe cure his rage. 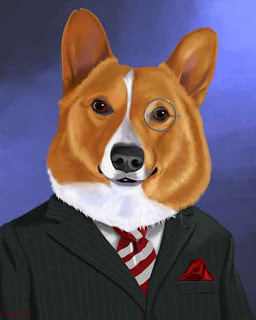