Levi stands at 5’6" with a head full of red-brown hair that seems to sit haphazardly on his head. He has emerald green eyes and a slight, agile frame. He enjoys a good fight, but he isn’t much of a sportsman and will most likely end the fight quickly if he can. He chooses to wear muted greens and browns for they tend to be the best choices when wanting to go unseen.
At the moment he has a few days growth of red/grey scruff on his jaw and his clothes show the obvious signs of someone that has been hiding/running from the demons that infest the city. If one looks carefully they can see that any rips or tears have been sewn up carefully and with decent skill.

Levi was born to a Jerrell and Henrietta Branton. They were not a wealthy couple, but they were able to scrape by doing simple, odd jobs around Westcrown. As Levi grew up his parents weren’t around very much because of their entire living situation, and as a result he fell in with the street kids learning how to steal without being noticed (child of the Streets). Levi was also a bit of a runt compared to all of the other kids and as such he was often picked on and bullied by the other, older kids, which taught him to react quickly and decisively.

When Levi was 6, his mother was killed by a sadistic drunk that was looking for a good time, and a few months after that his father died from an ever deepening drunken spiral. After too many nights and days of seeing his father stagger around in an alcoholic stupor, Levi swore never to indulge in ale and hard liquor, which was the fuel of his father’s destruction. Levi will partake in a little wine during a meal. The most he will have is one glass.

Levi fully adopted the street and did rather well for himself, until almost two years later, during a time he found it hard to find food, and was caught stealing. He was thrown into the slave market. This was actually good for him because a family from House Julistarc bought him to be a companion for their own child, a boy that was only a year and a half older than Levi.

This new life was so much fun for Levi. He soaked up everything, and did everything he could to excel and keep in the good graces of his masters. He was schooled along with Phontus, the boy that he was a playmate for. Phontus was actually quite nice for many years, but as he got older Phontus became meaner and angrier, taking a lot of his emotional problems out on Levi. This drove Levi to really hate Phontus.

When Levi was barely 15 years old, he was approached by someone from House Arvanxi and was asked if he would spy on his family for them. He agreed, and signed a contract that promised a raise in his personal standing at sometime in the future.

That future came after about 5 years. The House of Arvanxi decided that House Julistarc was acquiring more power than they were comfortable with and wanted them to suffer a dramatic blow. It was decided that Phontus was to be killed. Levi wasn’t quite sure why Phontus was a target, but when they tasked him with getting this particular job done he was willing to accept it. Phontus’ and Levi’s schooling also included swordplay, but Levi was only ever allowed to use daggers and small swords. With this knowledge, Levi was able to kill Phontus.

After he killed Phontus, he was taken in by House Arvanxi as per their contractual agreement. Instead of a slave though, he was taken on as more of an employee, but without too many rights. After a short time he was ordered to become the bodyguard of one of House Arvanxi’s children, Haran, who was two years younger than Levi.

Now, Levi was not really that thrilled about being a bodyguard, but his contract required that he followed orders so he did. Haran was already on the path to becoming a Hellknight, so protecting him was actually not that hard as more people were afraid of him than wanted to kill him.

As with many Cheliaxians, Levi was constantly looking how to advance his standing and more specifically to get out of the contract he had signed. After another 5 years Haran got to a position in the Hellknights that allowed him to partake in the crusades against the Worldwound. He accepted, must to the dismay of Levi because that meant that Levi would have to accompany Haran on this crusade. Though this was very likely Levi’s chance to get out of his contract. He would just have to make sure that Haran died during these crusades.

He has absolutely no respect for demons, and wouldn’t work for them unless of course it is the only way to save himself. He would most definitely do everything he could to get out of any deal or contract.

Here is Levi’s Code:
1) Do not risk yourself for another.
2) Honor any contracts unless it violates #1.
3) Respect is only given to those that deserve it.
4) Never leave without something gained. (doesn’t need to be money/item)
5) Enemies are not to be left alive.
6) Never kill a child (< 12).
7) Animals are to be spared if possible. 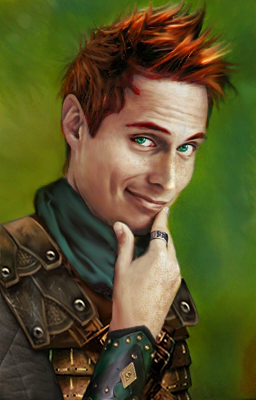