Chiemeka (pronounced Chee-YEH-meh-kuh, although she commonly goes by “Chi”) is twenty years old and, at 6’2" with broad shoulders and an athletic build, an imposing figure. She has dark skin and dark brown eyes, and she keeps her black hair in short twists – it is the most practical hairstyle for wearing a helmet.

She wears a new set of scale maille armor; when she is not in armor, Chiemeka tends to wear sturdy, practical clothing in blues and greens (her preferred colors). As is traditional for a paladin, she carries a longsword and a light steel shield with the emblem of Iomedae upon it. She also carries a small handaxe as a backup weapon, and a shortbow, although she doesn’t use the bow much.

Chiemeka has a broad, friendly smile that allows her to put people at ease despite her large size, and she exhibits excellent awareness and control of her body. She is very concerned about being perceived as unintelligent or uneducated, so she tends to use unnecessarily big words and complicated syntax (although not always correctly).

Due to the strife she experience in childhood, Chiemeka views the church (the church of Iomedae specifically) as the only hope that Golarion has for peace, order, and stability. She is a true believer, and she also believes that she can spread the good word through noble deeds. “Lead by example,” is a good summation of her views. Although she would be loath to admit it (because it doesn’t become a paladin to be prideful), she also craves public recognition and respect for her actions.

Chiemeka was born in Galt, to which her parents immigrated from Qadira long before she was born. They had a very poor sense of timing; soon after their arrival was the first Galtian revolution and, as a young couple with little to no resources, her parents were unable to escape the resulting chaos and bloodshed.

Nevertheless, they tried to maintain some semblance of stability as they gave birth to Chiemeka and her two siblings – an older brother (Akachi) and a younger brother (Chinweuba). As one regime after another came to power and was subsequently overthrown, the growing family did its best to stay safe – a sometimes challenging task, depending on how any given government viewed immigrants. It seemed that, as soon as they’d built up any amount of wealth, government officials would sweep in to “requisition” it, or it would be stolen by looters and vandals. Still, they worked hard to make something – anything – of lasting value.

It was during the last throes of one of the more xenophobic regimes that Akachi was killed. He was a “good kid,” not one of the revolutionaries that had just begun making trouble for the government, but the soldiers sent to pacify that region hadn’t much cared to make the distinction. Akachi’s death almost tore the fabric of Chiemeka’s family apart. For young Chiemeka in particular, who had always looked up to Akachi as a role model, it seemed that all sense, all reason, all justice was gone from the world (little as there was to begin with). For the next several months she lived in a fog, barely aware of anything around her.

This is, perhaps, why she had no idea what was going on when one night there was a knock on the door, and her parents welcomed a tall woman in shining armor. In hushed tones, Chemeka’s parents told her and Chinweuba to pack their belongings and follow the woman, who would take them somewhere safe, away from all the fighting. “She will protect you,” they said. Chiemeka looked at the woman, tall and strong, with a sword hanging from a belt, and, for the first time in a long time, felt some glimmer of hope.

The woman, a paladin of Iomedae, took Chiemeka and Chinweuba to one of the church’s seminaries, which had become a makeshift orphanage in addition to a school. There, safe within the solid stone walls, Chiemeka flourished. Although she was always a large child, she grew to a truly prodigious size, and her athletic abilities were readily apparent. The Order of Holy Sentinels no doubt would have approached Chiemeka for recruitment if she hadn’t volunteered to join. 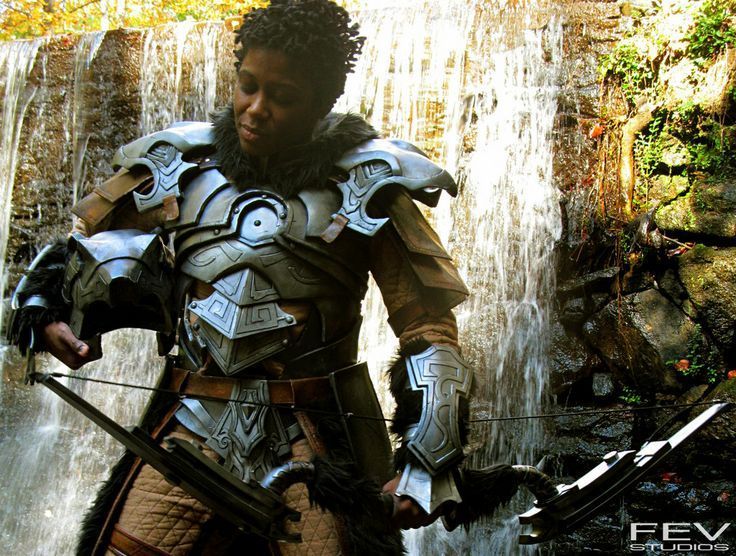