An elven wizard bearing a deep hatred of demons

Humility has never been one of Aravashnial’s defining personality traits, though he is well regarded among his fellows as a talented and courageous wizard. A tall, gray haired elf hailing from Kyonin, Aravashnial has joined the crusaders in Kenabres to learn the ways of fighting demons to better aid his kinfolk in destroying Treerazer. Though he he fought against the demons for nearly thirty years now, he maintains that there is still much to learn in fighting fiends from the Abyss.

Aravashnial is somewhat of a conspiracy theorist and always has a number of outrageous theories brewing. His latest is that certain groups among the crusaders have been infiltrated by demon cultists, and that their influence has been more damaging to the war effort than actual battles.

The wizard was nearly killed during Black Armasse, when the whip of the balor Khorramzadeh caught him during the demons clash with the dragon Terendelev.

Aravashnial has always been driven to excel. Both of his parents were wizards, and soon after he learned to read and write, his mother and father began teaching him of magic. He was a dutiful son, but as he grew older, his own personality began to assert itself. He chose to specialize in conjuration rather than abjuration, much to his family’s displeasure. Further, his growing obsession with Tanglebriar began to worry not only his parents, but also his teachers and fellow apprentices— they believe that Aravashnial had been lured to the worship of dark powers, when in fact the opposite was true.

Aravashnial felt the stain of Tanglebriar on Kyonin was an affront to his heritage and to magic itself, and hoped he would be the one to discover a way to send the nascent Demon Lord Treerazer back to the Abyss. As his studies progressed, however, he came to the unshakable conclusion that without outside aid, the best Kyonin could hope for in the longstanding conflict against Tanglebriar was merely a continued stalemate. When his apprenticeship ended, he shocked his family by announcing his intention to join the Mendevian Crusade. He would join the crusaders, learn their methods of battling demons, and then some day in the future return with that knowledge to aid his homeland.

Before setting out for Mendev, Aravashnial decided he should first visit other parts of the Inner Sea to continue his studies as a conjurer. As he traveled, he stopped at every large library he came across to conduct research. While exploring the ruined remains of a library in Galt, he came face to face with a young woman doing the same. She invited him to accompany her to Mendev and join her crusading guild, the Everbright Crusaders in fighting the demons of the Worldwound.

Aravashnial has spent the last 2 years in Mendev working with the Everbright Crusaders. He has undertaken over a dozen missions into the Worldwound, each time emerging with more scars and a new hatred of demons, but also increased knowledge. Aravashnial passes what free time he has drafting possible tactics to use against Tanglebriar, so that if he dies on a mission, what he’s learned can be sent back home to aid his people. He supports himself by crafting magic items and selling them to shops in the Gates District and by casting spells for hire, but he doesn’t own a storefront himself and would disdain a job as a “store clerk.” 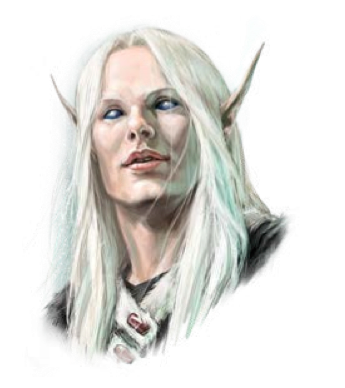